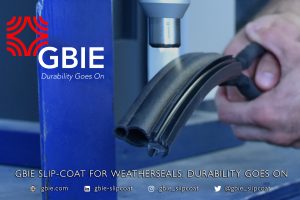 Pretreatment before applying coating to automotive weatherseals can be very effective but it is not always needed. Some pretreatments can even reduce coating performance. Using pretreatments adds process complexity and cost: either capital cost for expensive plasma and corona systems, or material costs for primers.

GBIE’s R&D lab always works with our customers to determine whether pretreatment would be beneficial for optimal coating performance and adhesion of our SLIP-COAT products.  If it doesn’t add benefit, we don’t recommend it!

Plasma treating for high-surface activation is one of GBIE’s laboratory resources that is used for customer development projects. It is a safe and environmentally-friendly surface treatment technology that, for certain substates, can help to achieve a more robust bond between the elastomer and coating.

Primers can be either solvent based or water based. Obviously solvent based primers increase the VOC emissions coming from your facility, but they also increase the risk of fire because they are flammable and they likely have other health hazards too. Have you ever seen primer on fire in an inline (on the extrusion line) primer + coating application process? GBIE has heard first hand stories of such scary events! Solvent based primers are also more difficult to transport and store and this difficulty translates into added cost for transport and capital costs – does your facility have a dedicated explosion proof or fireproof room for storage and preparation of solvent based primers and coatings?

Although generally safer, water-based primers may still come with hazards to humans such as being corrosive to skin and eyes, and they may still have considerable VOCs.

GBIE has developed a new line of water based primers that are without hazard, very low in VOCs, and are very effective in circumstances that require primers.

GBIE tests to failure, so we can learn 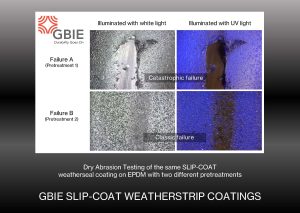 Here we show the results of dry abrasion testing of the same EPDM weatherstrip sample coated with the same SLIP-COAT coating but pretreated with two different primers.

Both samples have failed after a similar amount of abrasion. But the photos show the way they failed and provide strong evidence to indicate why one pretreatment is better than the other.

The failure mechanism shown in Failure A is by delamination: the evidence is large sections of intact coating peeled off the EPDM. The technician noted that the failure happened in a very short number of cycles. GBIE calls this catastrophic failure.

Failure B is classic failure by wearing through the coating. Although coating failure is evident in the photo, some coating is still present on the part.

When the coating initially fails on the vehicle, unwanted noise will immediately occur in Failure A, whereas in Failure B, the sections of coating ‘hanging on’ will prevent unwanted noise until much more abrasion has occurred.

Preventing unwanted noise is the reason why OEMs want weatherstrips coated and are willing to pay for it. Failure A will lead to warranty claims from the vehicle owner whereas Failure B will not.

Our R&D lab services are no cost and waiting to help you. So please ask if you have concerns about the seals you are making, coating adhesion problems, want to reduce costs or VOCs coming from your facility, or simply want an expert opinion about the best option for your coating application.

🗞️ Rubber News: “The new plant was designed as a ‘fantasy building’ from the start with an emphasis on optimizing workflow…”

Global OEMs want high-performing, great looking #weatherseals that will last for the lifetime of their vehicles. We are proud that so many of them trust our #SLIPCOAT waterbased, durable coating solutions to make this happen.

🗞️ Rubber News: “The new plant was designed as a ‘fantasy building’ from the start with an emphasis on optimizing workflow…”